Life as a CRNA

It can feel overwhelming trying to discern the difference between a 401(k), 403(b), 457(b), traditional IRA, Roth IRA, and an HSA. And even if you did understand the difference, how do you know which one to contribute to and how much? More on this later.

Pre-tax vehicles (e.g., 401(k), 403(b), and 457(b)) are traditional retirement accounts where contributions are not taxed until AFTER you retire. As previously mentioned, your contributions are invested in a fund that accumulates interest as well as dividends and will not be subject to federal/state income tax until retirement age. Currently, the IRS limits the annual contribution to each of these accounts to $18,000 (unless your age > 50, then that limit is increased to $24,000). Remember, the other advantage to contributing your retirement is that it decreases your taxable income. Back to the previous example, if you make $150,000 as a new grad CRNA and you contribute $18,000 to your 401(k), the federal government will tax you on $132,000 rather than $150,000; thus, lowering your tax liability.

So, what exactly is the difference between these vehicles? Why exactly are they given these names? The unusual names of most of these plans come from the parts of the Internal Revenue Code that relate to them. In a nutshell, the 401(k) is a retirement savings account often offered to private sector employees. It’s the retirement account that many of us are familiar. So, if you’re working for a non-profit, private hospital or a large anesthesia group, most likely you’ll be offered a 401(k) plan. 403(b) and 457(b) plans are usually offered to public sector employees. Regardless of whether you work in the private or public sector, it’s important to take advantage of these tax-shelter plans as they serve two purposes:

If you’re a public employee, your next question is probably which retirement vehicle should you store your money, the 403(b) or 457(b)? The answer to this question is it depends on what your priorities are. There are two major distinctions between the 403(b) and 457(b). With a 403(b), it is far easier to rollover your contributions in this vehicle to an IRA should you leave your employer. With a 457(b), I have read and heard of individuals who have run into difficulties with rolling over a 457(b) into IRA after they have left their employer. As such, your money may either be forced to sit in a 457(b) or you will have to withdraw the money from the account, which brings us to the second key difference.

Ultimately, the decision to invest in a 403(b) or 457(b) is based on what kind of priorities you have with your money. Do you want to be able to easily roll over your retirement money into an IRA once you leave an employer? Go with a 403(b). Do you want to be able to cash out your retirement when you leave an employer irrespective of your age without incurring an early 10% withdrawal penalty? Go with a 457(b).

Once last thing, like the 401(k), withdrawing from the 403(b) and 457(b) begins at age 59 1/2. However, there are certain circumstances (e.g., first time home buyer, education, etc)  whereby you can access funds in your retirement accounts without paying any taxes on them. You are effectively taking a loan out on yourself and most often, you will have to pay your retirement fund back with interest (but that’s okay because that interest goes into your account). You’re borrowing against the Bank of Yourself. One thing to note with this blog post is that you need to consult your HR department regarding the provisions of the company’s 401(k), 403(b), and 457(b) as each company may have a slightly different policy with regard to how special distributions work.

In conclusion, if you’re a CRNA, you’re in a higher tax bracket. Unless you’re a guru with your money and know how to wisely invest it, my personal belief is one ought to maximize both retirement vehicles in order to limit your tax liability and just put that money into low-cost broad market index funds (a blog post for another time). 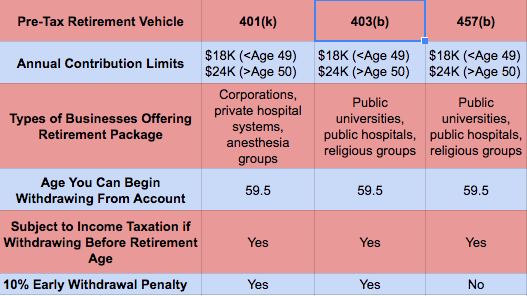